Interpersonal conflict is a fact of life and can arise in almost any sphere, from organisations through to personal relationships. Learning to resolve it effectively, in a way that does not increase your stress levels, is therefore important for everyone.

The first step to conflict resolution is to decide what strategy you are going to use to address it. However before you can do that, you need to identify the root source of the conflict, and therefore its type.

There are three main types of conflict:

Personal or relational conflicts are usually about identity or self-image, or important aspects of a relationship such as loyalty, breach of confidence, perceived betrayal or lack of respect.

Instrumental conflicts are about goals, structures, procedures and means: something fairly tangible and structural within the organisation or for an individual.

Conflicts of interest concern the ways in which the means of achieving goals are distributed, such as time, money, space and staff. They may also be about factors related to these, such as relative importance, or knowledge and expertise. An example would be a couple disagreeing over whether to spend a bonus on a holiday or to repair the roof.

It’s important to emphasise that dealing with conflict early is usually easier, because positions are not so entrenched, others are less likely to have started to take sides, and the negative emotions are not so extreme. The best way to address a conflict in its early stages is through negotiation between the participants.

5 Strategies for Dealing with Conflict

This is the classic win/lose situation, where the strength and power of one person wins the conflict. It has its place, but anyone using it needs to be aware that it will create a loser and, if that loser has no outlet for expressing their concerns, then it will lead to bad feeling.

This is the ideal outcome: a win/win situation. However, it requires input of time from those involved to work through the difficulties, and find a way to solve the problem that is agreeable to all.

This is where everyone pretends there is no problem. It’s helpful if those in conflict need time to ‘cool down’ before any discussion or if the conflict is unimportant, but cannot be used if the conflict won’t just die down. It will create a lose/lose situation, since there will still be bad feeling, but no clearing the air through discussion, and results, in Transactional Analysis terms, in ‘I’m not OK, you’re not OK’.

5) Smoothing Over the Problem

On the surface, harmony is maintained but, underneath, there is still conflict. It’s similar to the situation above, except that one person is probably OK with this smoothing, while the other remains in conflict, creating a win/lose situation again. It can work where preserving a relationship is more important than dealing with the conflict right now, but is not useful if others feel the need to deal with the situation.

These five behaviours can be shown in terms of a balance between concern for self and concern for others: 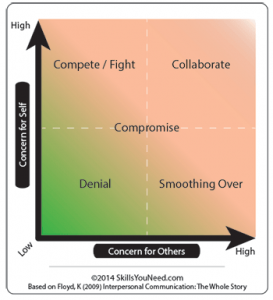